Whether a novice or connoisseur, taking a route through Ronda’s wine country makes for an enjoyabe break

Across a 1000 metre high plateau overlooking Ronda, history continues to reveal itself. Dating back some two millennia, the remains of a prominent Roman city are still being unearthed. Its striking, iconic amphitheatre remains well intact, and reflects the wealth of this once vibrant community, built on the success of its wine production. Ancient coins, once buried amongst the limestone earth, have been discovered, originally minted by the city and bearing the icon of a bunch of grapes. This place is still called Acinipo, ‘the land of wine’. 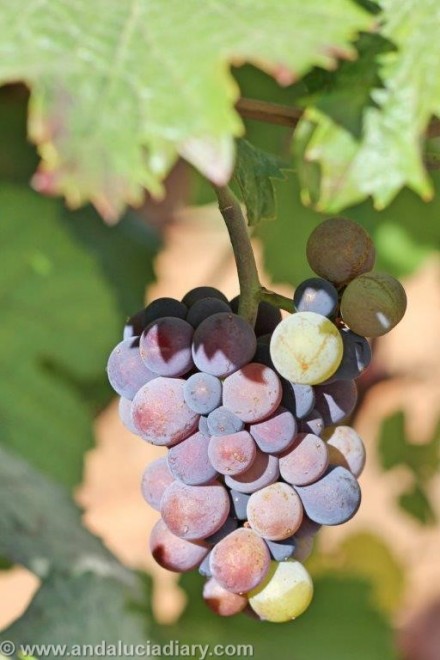 So it seems appropriate that some 2000 years later, one of Ronda’s most celebrated modern wines should bear the name ‘Acinipo’. Created by the F. Schatz winery, it is part of a selection of artisan wines from this Ronda organic ‘bodega’ that has become an integral part of area’s wine-making renaissance.

This boutique winery’s artisanal approach has inspired others to recover Ronda’s wine heritage. Now more than three decades after Freidrich Schatz and his son first came to Ronda, there are tens of bodegas in the area offering modern, distinctive wines. Since there are many wineries open to the public offering tours and tastings, it’s an enticing opportunity to create your own informative and entertaining wine route close to home, as a day-trip or a long weekend.

Ronda wineries may use age-old production methods, but the young wines are thoroughly modern and the attitude and style of the wine-makers here is open and friendly. It’s the ideal place for a novice to comfortable learn about wine, without the complex and off-putting vocabulary and approach of more traditional European wine regions.

Back in 1982, when Friedrich Schatz came to Andalucia, one wouldn’t have found a local wine in Ronda. The town’s remarkable legacy of grape growing and wine-making dating back to Acinipo and even before, appeared to have been lost. Some believe it was under the Moors that wine production was eroded in Andalucia. Yet it was in fact with the late arrival, in the nineteenth century, of the deadly phylloxera pest that the region’s vines were wiped out; and afterwards most producers turned to more lucrative olive groves and cereal crops. 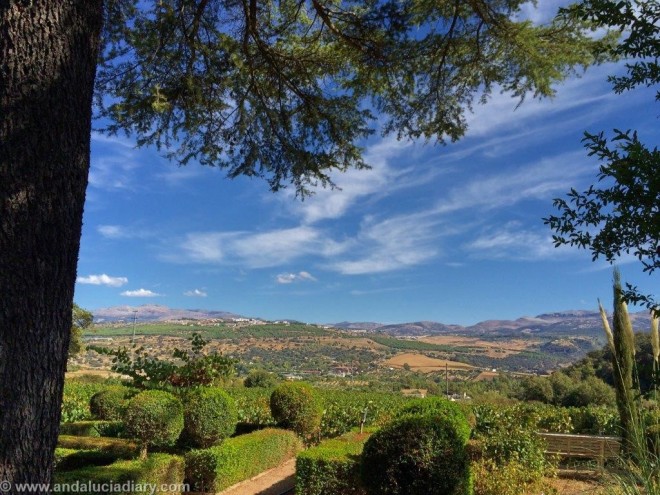 Bringing a wealth of wine-making expertise with him, Friedrich Schatz, from the Tyrol region on the German Italian border, was the first to re-establish a winery in Ronda for generations. He was a genuine pioneer, who against all odds, planted vines that were to flourish in Ronda’s unique micro-climate, between the Sierra de la Nieves mountains and the Grazalema Natural Park. This organic bodega continued by his son, uses aromatic plants and innovative biodynamic cultivation methods to enable the grapes to reach maturity without the need for chemicals or pesticides.

The family has been central in the establishment of the area’s ‘Sierras de Malaga’ wine certification of rosés, reds and white wines of less than 15 per percent alcohol (as opposed to the better known ‘Malaga’ domination of sweet wines, typically of more than 15 percent alcohol).

Today the F. Schatz bodega’s award-winning wines include an aromatic Muskattrollinger rosé, a deliciously balanced chardonnay, as well as elegant reds, from Pinot Noir, Petit Verdot, Tempranillo, Syrah and Cabernet Sauvignon grape varieties. By appointment only, a private tour of Finca Sanguijuela with Friedrich, who has carried on the family tradition, is a great place to start a Ronda wine tour. 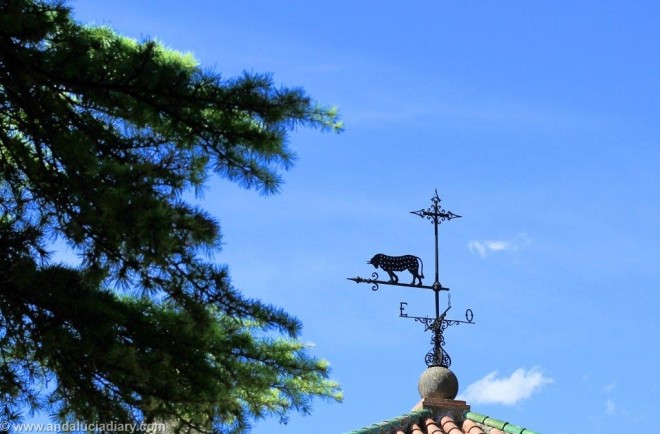 As one draws up to the impressive Cortijo los Aguilares, there is a line of three trees. The first is a North African palm, the second a Mediterranean fig, whilst the last is a pinsapo, the rare pine found in the nearby Sierra de la Nieves. Wine maker Bibi García explains that these trees eloquently summarise the climatic conditions that oenologists are confronted with in Ronda. Local residents will concur that although blessed with a temperate Mediterranean climate for much of the year, with warm days and cool nights, Ronda can sometimes feel more like Africa during high summer, with warm dry, desert-style breezes and extended periods of drought, whilst during wintertime alpine-like temperatures falling well below freezing and snow are not uncommon.

With such challenging conditions, and with relatively small amounts of land under vine, meticulous attention to detail is the key to success with boutique wine making. Bibi offers a private tour of Cortijo los Aguilares that takes in all aspects of the estate’s production, from walking amongst the vines and taking in the stunning views across the Andalusian countryside, to the pressing process, fermentation, right through to bottling: and of course a ‘cata de vinos’, a wine tasting in the cortijo’s stylish tasting rooms. 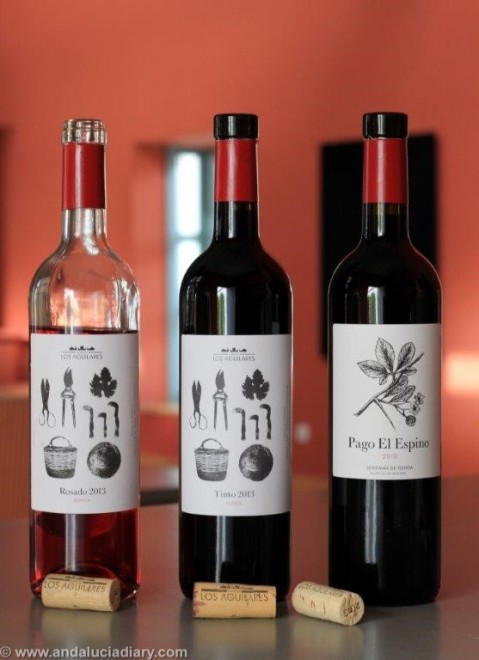 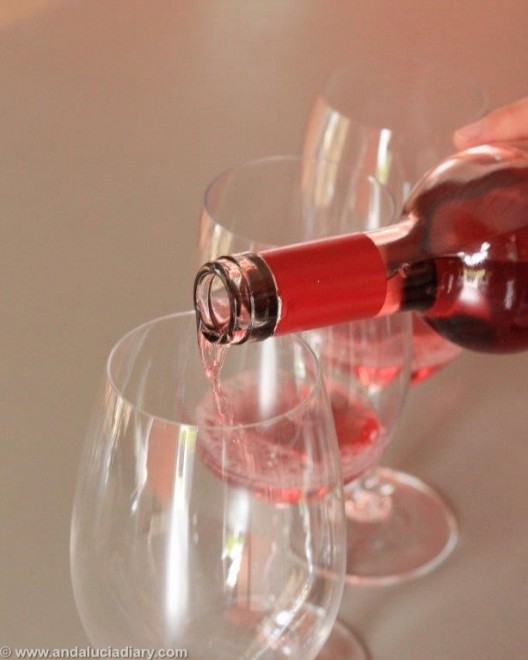 Bibi explains how the Itarte family, from San Sebastian, came to Ronda in the late 1990s, established Cortijo los Aguilares, and initially planted 18 hectares of land with Pinot Noir, Tempranillo, Merlot, Syrah, Cabernet Sauvignon and Petit Verdot. Production focuses on largely traditional wine-making, from harvesting by hand through to production that uses the least possible amount of mechanisation. In the fermentation room, things are thoroughly modern though with large stainless steel vats, as well as an innovative ‘egg’, a chemical-free concrete fermentation chamber that the winery is now using for some of its wine. The huge elliptical-shaped vessel said to mimic the breathable nature of the original Roman amphorae that would have been used in Acinipo, offering uniform fermentation. Afterwards the wines are aged in oak casks in the temperature controlled cellar. The results are memorable wines, such as a celebrated rosé, internationally-recognised vintage reds, as well as the bodega’s characteristic Pinot Noir. 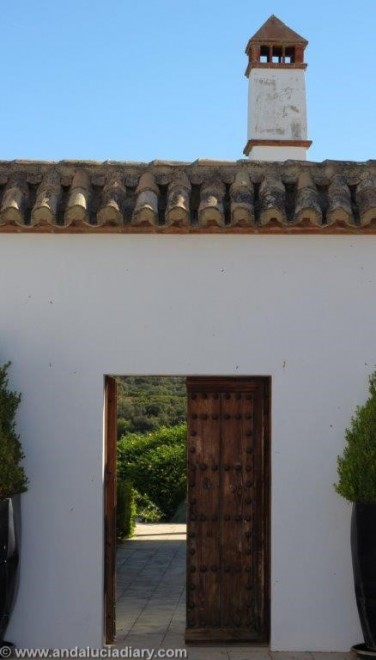 On a private tour, one learns how climate, soil and the grape variety, combined with the know-how and style of the individual wine maker, all combine to create the distinctive types of Ronda wines. One of the remarkable things about this part of the world is the extraordinary variety of wines from such a small area, and such a modest amount of vines.

Even Malbec, the French grape variety popular in Argentina and Chile, can be found in Ronda. Bodega Conrad, a winery originally established by a Swiss couple Theo and Ana-Mana Conrad fifteen years ago, has planted the grape which seems to thrive in Ronda’s elevated landscape. Malbec is now found in their delicate yet intense ‘Cristina’ red wine. 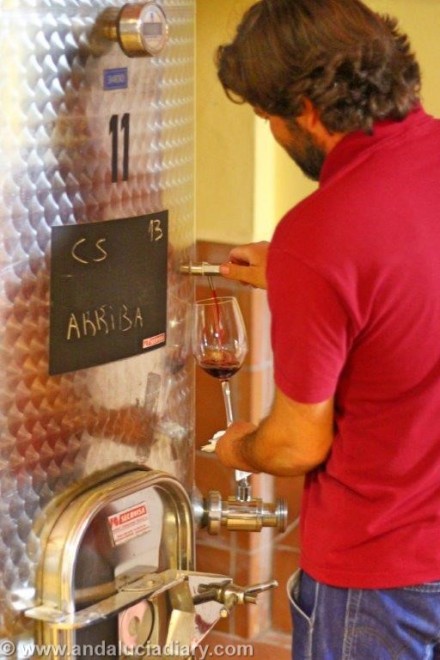 Conrad’s wine-maker, Rodrigo Nieme Val, originally from Chile, brings a wealth of innovation to the bodega and has recently created new wines, including a white, ‘Leona Hermosa’. This wine is made with the popular Malaga grape moscatel (Muscat), usually associated with the province’s famous sweet wines. Yet Rodrigo has blended it with Sauvignon Blanc, retaining the characteristic aromas of a moscatel but with the fresh, crisp taste of a modern white wine. 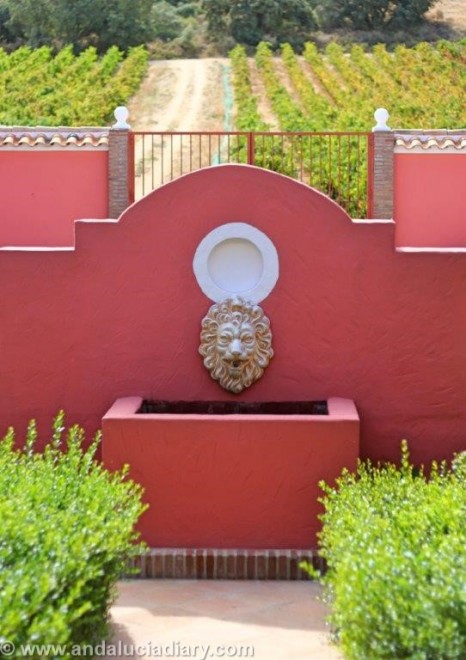 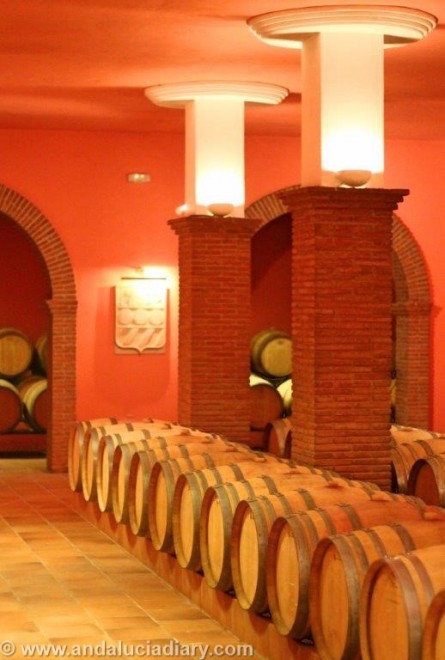 The Conrad winery is a pleasure to visit; the beautiful building was created using ‘Feng Shui’ principles, creating a welcoming, elegant winery, with a compact fermentation room, and an impressive subterranean cellar where one can see the wines aging in oak barrels. Conrad has started to innovate with the use of a few pine casks to understand the impact on flavours. For the tasting, guests are invited to the welcoming garden terrace.

These pioneering wineries are helping to put Ronda and the designation of origin ‘Sierras de Malaga’ on the world map of emerging, new wave, modern wine producing regions; and represents one of Spain’s new wine tourism destinations.

Ronda is less than an hour inland from Marbella by car and is also served by regular train services from across Andalucia.

There are over 30 wineries around Ronda, many of which offer tours and tastings. Most of the bodegas ask that visitors book a tour in advance.

Ronda’s wineries have collaborated on a tour initiative, bringing together local accommodation options, bodegas and restaurants to help local and international visitors plan their visit. The website is still being developed but is already a source of some background information.

Previous: Praktik Bakery Hotel – Sometimes, simplicity can be the most delicious of luxuries
Next: Vintage Porto