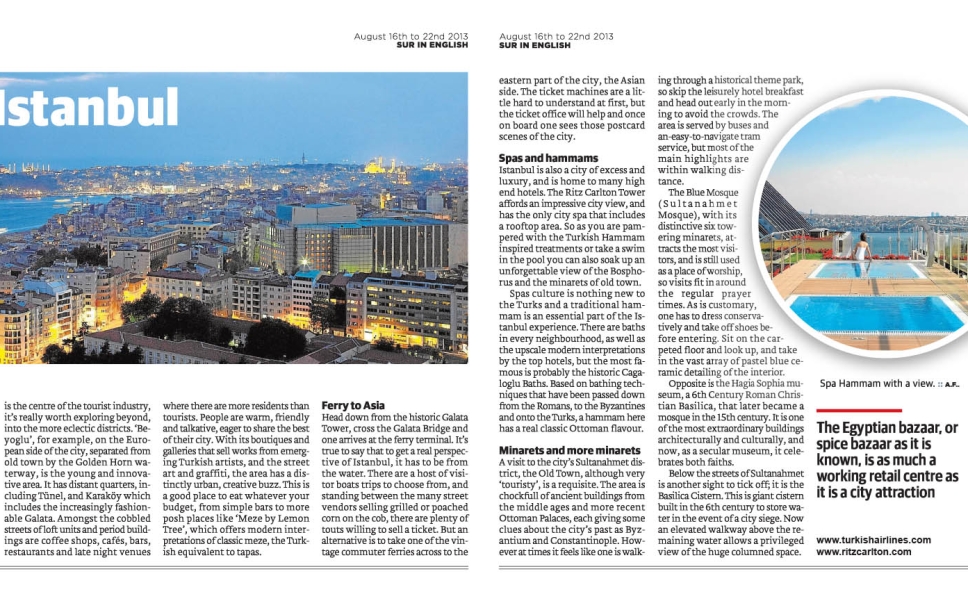 ISTANBUL – This ancient and modern city, that bridges Europe and Asia, is still open for business and travel

As the world’s only city that straddles two continents it’s certainly tempting to use a few travel writing clichés when describing Istanbul. Yet in this mega-city, the ‘east meets west’ and ‘land of contrasts’ descriptions actually hold true. It’s a crowded, chaotic, yet also sophisticated and clean metropolis where one moment you might be walking down a European style Belle Époque avenue and then moments later be surrounded by exotic ‘Arabian Nights’ architecture.

The iconic minarets of the city’s historic mosques in the Sultanahmet district are quintessential Eastern, but Istanbul is also very much a modern city. Although the old town is the centre of the tourist industry, it’s really worth exploring beyond, into the more eclectic districts. ‘Beyoğlu’, for example, on the European side of the city, separated from old town by the Golden Horn waterway, is the young and innovative area. It has distinct quarters, including Tünel, and Karaköy which includes the increasingly fashionable Galata. Amongst the cobbled streets of loft units and period buildings are coffee shops, cafés, bars, restaurants and late night venues where there are more residents than tourists. People are warm, friendly and talkative, eager to share the best of their city. With its boutiques and galleries that sell works from emerging Turkish artists, and the street art and graffiti, the area has a distinctly urban, creative buzz. This is a good place to eat whatever your budget, from simple bars to more posh places like ‘Meze by Lemon Tree’, which offers modern interpretations of classic meze, the Turkish equivalent to tapas.

Head down from the historic Galata Tower, cross the Galata Bridge and one arrives at the ferry terminal. It’s true to say that to get a real perspective of Istanbul, it has to be from the water. There are a host of visitor boats trips to choose from, and standing between the many street vendors selling grilled or poached corn on the cob, there are plenty of touts willing to sell a ticket. But an alternative is to take one of the vintage commuter ferries across to the eastern part of the city, the Asian side. The ticket machines are a little hard to understand at first, but the ticket office will help and once on board one sees those postcard scenes of the city.

Istanbul is also a city of excess and luxury, and is home to many high end hotels. The Ritz Carlton Hotel affords an impressive city view, and has the only city spa that includes a rooftop area. So as you are pampered with the Turkish hamam inspired treatments or take a swim in the pool you can also soak up an unforgettable view of the Bosphorus and the minarets of old town.

Spa culture is nothing new to the Turks and a traditional hamam is an essential part of the Istanbul experience. There are baths in every neighbourhood, as well as the upscale modern interpretations by the top hotels, but the most famous is probably the historic Cagaloglu Baths. Based on bathing techniques that have been passed down from the Romans, to the Byzantines and onto the Turks, a hamam here has a real classic Ottoman flavour.

A visit to the city’s Sultanahmet district, the Old Town, although very ‘touristy’, is a requisite. The area is chockfull of ancient buildings from the middle ages and more recent Ottoman Palaces, each giving some clues about the city’s past as Byzantium and Constantinople. However at times it feels like one is walking through a historical theme park, so skip the leisurely hotel breakfast and head out early in the morning to avoid the crowds. The area is served by buses and an-easy-to-navigate tram service, but most of the main highlights are within walking distance.

The Blue Mosque (Sultanahmet Mosque), with its distinctive six towering minarets, attracts the most visitors, and is still used as a place of worship, so visits fit in around the regular prayer times. As is customary, one has to dress conservatively and take off shoes before entering. Sit on the carpeted floor and look up, and take in the vast array of pastel blue ceramic detailing of the interior.

Opposite is the Hagia Sophia museum, a 6th Century Roman Christian Basilica, that later became a mosque in the 15th century. It is one of the most extraordinary buildings architecturally and culturally, and now, as a secular museum, it celebrates both faiths.

Below the streets of Sultanahmet is another sight to tick off; it is the Basilica Cistern. This is giant cistern built in the 6th century to store water in the event of a city siege. Now an elevated walkway above the remaining water allows a privileged view of the huge columned space.

Coffee, and other delights

Any list of things to do in Istanbul surely includes trying a Turkish coffee. The best I tried was in Café Fes, in the Grand Bazaar. This vast covered market is an unexpected treat. It’s not a chaotic or disorganised frenzy like a North African souk; instead it is an immaculately presented covered market of small retailers. Amongst the shops are cafés and bars including the Fes Café that presents its Turkish coffee on a silver tray, accompanied with a shot of delicious almond liqueur, a handmade Turkish delight and a glass of fresh water. It is one of the best ways to be introduced to this thick and strong drink where you taste and feel the texture of the ground coffee beans.

To satisfy an appetite for exotic eastern products, visit the Egyptian Bazaar, or spice bazaar as it is also known. This is as much a working retail centre as it is a city attraction, offering striking and vibrant scenes of spices piled high; extravagant handmade Turkish delight and displays of colourful Mediterranean and Middle Eastern foods.

With the opening of the 13th Istanbul Biennial of Contemporary Art in September and the celebrations marking the 90th Anniversary of the Turkish Republic in October, autumn 2013 might just be a great to visit Istanbul after all.

Istanbul, although not the political capital of Turkey, is certainly the country’s largest city with some 15 million inhabitants, and is Turkey’s economic and cultural powerhouse. It is also on many people’s travel ‘bucket lists’; but is it a good time to visit?

The violent anti-government riots seen in June around Istanbul’s Gezi Park and Taksim Square threw the city into the global spotlight.

Things have now quietened down in Istanbul, and neither the UK nor Spain advise against travel to Istanbul, but simply advise common sense, such as avoiding demonstrations. Many of the plush 5 star hotels around Taksim Square are more eager than ever for business so this could be the best time to grab a luxury deal. What’s more, visiting after the summer is one of the best times to go; the heat has subsided, there are fewer crowds and airline and hotels costs are more competitive. Istanbul is also now a major airline hub with Turkish Airlines offering direct flights to major cities across Europe and the world.